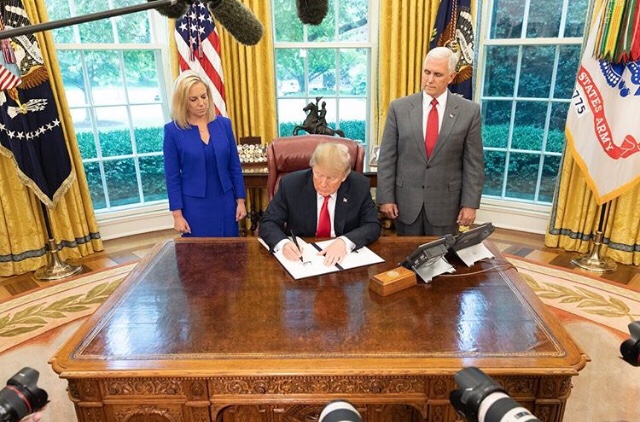 A Question of Children, Human Decency, Leadership, and Prayer

Most decent Americans do not want to see America sink in debilitating debt and abandon its already massive social commitments. Although Christians know that all of mankind’s problems will not be solved until Jesus returns, they still want to prevent as much suffering and injustice as possible.

The 1997 Flores settlement was intended to protect immigrant children, but an unintended result was that it diminished the government’s ability to faithfully manage its other responsibilities. What is more, post-911 America necessarily became more concerned about national security, including the growing problem of gangs and illegal drugs. The nation’s security, the concerns of legitimate asylum seekers, the importance of maintaining a society based on the rule of law, and the needs of children became competing interests. In this mix, those with the smallest voices were overlooked until their cries and tears became magnified in the public consciousness.

America, therefore, is asking big questions. How can immigrants be given a fair trial until all the evidence is collected? How can those who would take advantage of America’s kindness be prevented from hurting others? How can due process and the rule of law be upheld? How can these objectives be obtained at a cost that America can afford? At the top of the list, however, is the one question that all these other questions also include. How can immigrant and American children be both protected and benefitted during the immigration process?

The President’s recent executive order directs various entities within the executive branch to disregard the Flores settlement so that children can remain with parents who are in temporary custody awaiting immigration hearings. At the same time, the executive order also directs the Attorney General to renegotiate the Flores settlement with the judicial branch. To keep families together, the government cannot release immigrant children without also releasing their parents. But the government, for security reasons, cannot release the parents until it is certain that they are legitimate asylum seekers and not lawbreakers. Historically speaking, when those requesting asylum have been released prior to their hearings, most of them never return for their hearings.

At this junction, Christians turn to God and pray.

First, Christians pray for the leaders of America, that the legislative branch writes honorable laws, that the executive branch faithfully enforces those laws, and that the judicial branch renders just decisions.

Second, Christians pray for America’s security, that evildoers are stopped, and that righteous people are emboldened to do good deeds.

Third, Christians pray that America has a great awakening of faith and righteousness.

Fourth, Christians pray for foreign countries, that they also have great awakenings of faith and righteousness, and that their citizens will be safe from evildoers.

Finally, Christians pray for those whom God calls to migrate from one country to another, that their journey will be safe, and that their welcome will be worthy of the God who calls them to migrate.

Thousands of Christians in the US signed a petition denouncing a lawmaker's call for Christian nationalism.

More than 80 Christian groups in the US condemned the bill legalizing same-sex marriage. In a letter signed by 83 faith-based groups, it called the Senate to oppose the said bill which they claim is an attack on people of faith.

Stand for the National Anthem

Should Christians Give Up on President Trump?